Brad, Kevin, Sarah, Laura and Gary went to the same house and continued working on the flooring and preparing (sanding) the walls. We also took off the security bars from the windows in preparation for texture spraying. Kevin helped our leader, Jerry, install a door, which was complicated because the opening was too small and not plumb. Kevin asked Jerry a bunch of questions, but Jerry kept shutting him out. 😐

Kevin tried out his tool belt for the first time. The belt contained the only tool he knows how to use, a Sharpie. 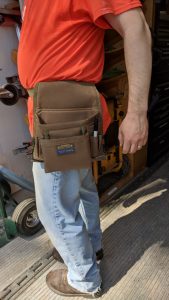 Laura and Gary finished the flooring in a bedroom. They really enjoyed showing off their work before it gets covered with protective cardboard (Ram Board). 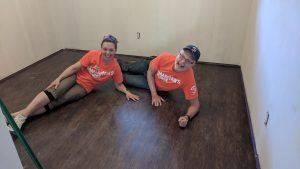 Scott, Heather, Dan, and our Illinois friends also returned to the same house and finished the countertop and installed the sink, which looks beautiful. 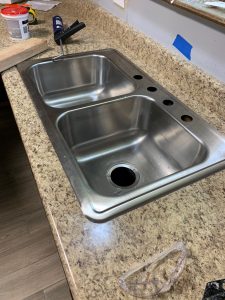 Dan did what he does best, sawed wood. Occasionally, he was awake. 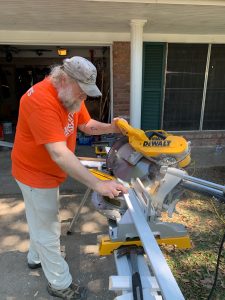 5 thoughts on “A Sharpie, a Counter, and a Saw”